The Infinite Monkey Cage is another General Interest Science-based podcast combining both fun and information in a series. It is hosted by the famous scientist Brian Cox and the comedian Robin Ince. The main subjects for discussion range from forensic science to quantum physics and everything in between. The science and technology enthusiasts describe it as a witty and irreverent look at the world through the scientists’ eyes. 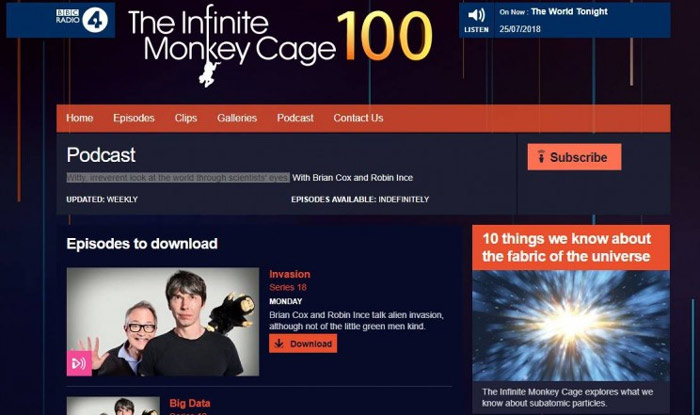 Main Engine Cut Off is a podcast about the space technology, Astro-strategy, latest space missions, space policy and strategy, and general life outside the Planet Earth. The owner of this blog is Anthony Colangelo who is enthusiast about Space Exploration. The space enthusiasts and budding astronaut can support his endeavors via Patreon or his online shop.

8. The Skeptics’ Guide to The Universe (SGU)

SGU is another popular podcast on iTunes about the news and updates on science and pseudoscience. It was first aired in May 2005. Later on, it gained much popularity among people. The information and entertainment come hand in hand in this podcast. This results in promoting critical thinking and general understanding of science among masses.

9. Stuff You Should Know (STYK)

The STYK podcast covers a wide range of topics related to science from genes to the Galapagos. It is hosted by Josh Clark and Charles Bryant. They deliver the facts and information about all the common things around in quite an interesting and entertaining way.

The Future Thinkers Podcast is about the evolution of science and technology in the coming future. It is co-hosted and produced by Mike Gilliland and Euvie Ivanova. They discuss a wide range of topics like the future of humanity and human society. This podcast is quite informative for the people who intend to explore the variety of culture and languages around the world.